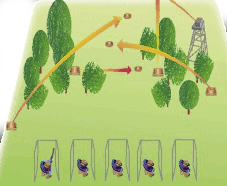 As the name suggests, Compak Sporting is a "compacted" game of Sporting Clays, Let's look at Sporting Clays first - this is a shotgun sport usually spread over 12 to 36 stations (shooting areas) occupying around 200 acres (0.81 km2), presenting 2 or 3 different clay targets at each. One shooter will shoot the targets, followed by the next and so on.

With Compak Sporting the space requirement is considerably less, and a squad of up to 6 shotgun shooters, (5 actively shooting), will stand in a straight line, each on a marked square (1 meter by 1 meter) and spaced 3 to 5 meters apart (i.e. the shooting line will be 12 to 20 meters long). In front of them will be the "target area". This is a rectangle 40 meters wide by 25 meters deep and positioned 4 to 5 meters in front of the line of shooters. (If the shooters are numbered 1 to 5, the rectangle will be centered on shooter 3).