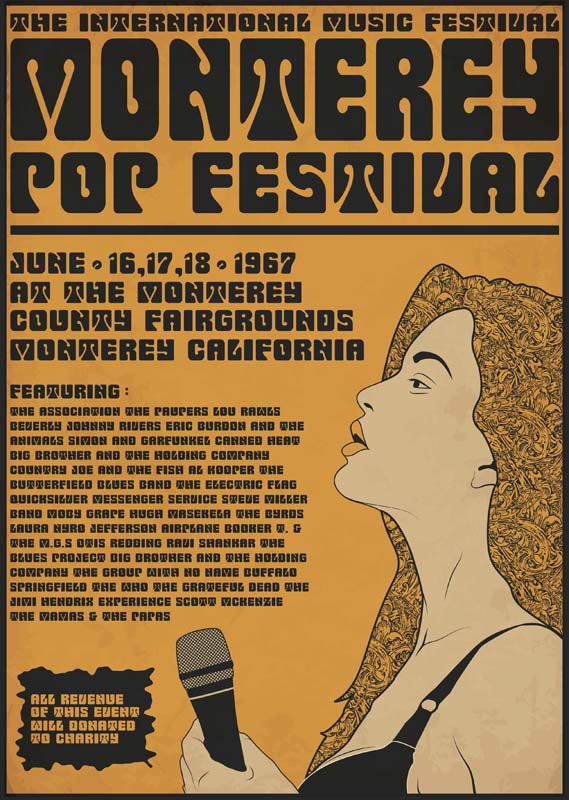 
By the time they got to Woodstock, Jimi Hendrix, Janis Joplin, the Who and the Grateful Dead were established superstars—heroes to the roughly half a million worshipful fans who trekked up to Max Yasgur’s farm to see them in the summer of 1969. Yet just two years earlier, they were entirely unknown to most of those worshipers. All four iconic figures on the 1960s music scene entered the American popular consciousness at an event that preceded and provided the inspiration for Woodstock itself: the Monterey Pop Festival. Held over three days during the height of the Summer of Love, the Monterey Pop Festival came to a close on this day in 1967, with a lineup of performers that included all of the aforementioned acts as well as Ravi Shankar, Buffalo Springfield and the Mamas and the Papas.

From a purely musical perspective, the Monterey Pop Festival was a groundbreaking event, bringing together nearly three dozen well-known and unknown acts representing an eclectic mix of styles and sounds. The great soul singer Otis Redding, the Indian sitar master Ravi Shankar and South African singer/trumpeter Hugh Masekala, for instance, all had their first significant exposure to a primarily white American audience at the Monterey Pop Festival, which also featured such well-known acts as the Animals, the Association, the Byrds, Jefferson Airplane and the Mamas and the Papas. In this sense, the festival not only pioneered the basic idea of a large-scale, multi-day rock festival, but it also provided the creative template that such festivals still follow to this day.

The organizers of the charitable Monterey Pop Festival also set a standard for logistical organization that the organizers of the for-profit Woodstock festival would attempt to follow, only to fall short under the immense pressure of overflow crowds and bad weather. In addition to arranging for private security and medical staff, the organizers of Monterey also deployed a staff of trained volunteers, for instance, whose sole task was to manage episodes among audience members partaking in the nearly ubiquitous psychedelic drugs.