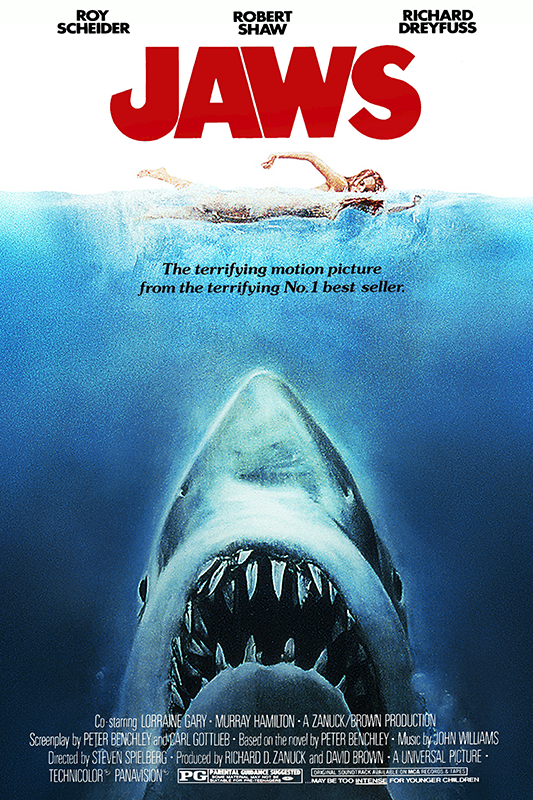 On this day in 1975, Jaws, a film directed by Steven Spielberg that made countless viewers afraid to go into the water, opens in theaters. The story of a great white shark that terrorizes a New England resort town became an instant blockbuster and the highest-grossing film in movie history until it was bested by 1977’s Star Wars. Jaws was nominated for an Academy Award in the Best Picture category and took home three Oscars, for Best Film Editing, Best Original Score and Best Sound. The film, a breakthrough for director Spielberg, then 27 years old, spawned three sequels.

The film starred Roy Scheider as principled police chief Martin Brody, Richard Dreyfuss as a marine biologist named Matt Hooper and Robert Shaw as a grizzled fisherman called Quint. It was set in the fictional beach town of Amity, and based on a best-selling novel, released in 1973, by Peter Benchley. Subsequent water-themed Benchley bestsellers also made it to the big screen, including The Deep (1977).

With a budget of $12 million, Jaws was produced by the team of Richard Zanuck and David Brown, whose later credits include The Verdict (1982), Cocoon (1985) and Driving Miss Daisy (1989). Filming, which took place on Martha’s Vineyard, Massachusetts, was plagued by delays and technical difficulties, including malfunctioning mechanical sharks.